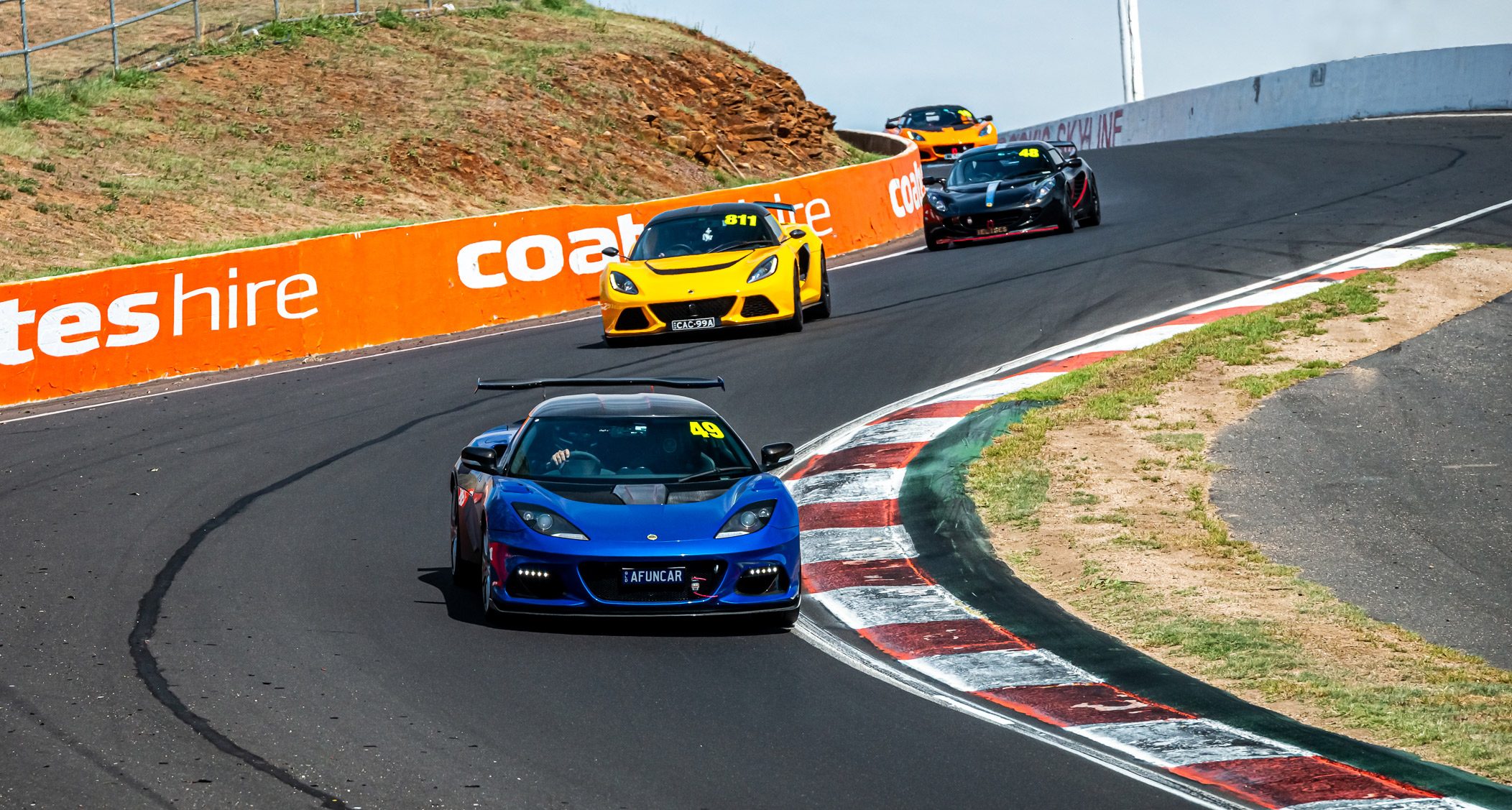 Is there a more spectacular sight than the sun setting over Mount Panorama… especially on the eve of a Lotus Track Day on the hallowed 6.214km tarmac rollercoaster?

As the Lotus Cars Australia (LCA) community assembled for dinner – in pit lane, no less – and the light gently faded, it was a genuine ‘pinch yourself’ moment for the 120-plus drivers in attendance.

For the preceding afternoon, the combined LCA teams (dealers, techs, office, executive staff, logistics… the list goes on) were hard at work setting the scene, signing drivers in, constructing the incredible dinner layout and fettling customer cars. These equally rolled off transporters on slicks, or drove straight in from Sydney, to the pit garages; spaces that could share decades of stories. And with Lotus Cars Australia’s third consecutive Lotus track event lying ahead, these famous garages would echo to highly-tuned motorsport-grade engines once more.

Over a three-course meal, head of Lotus Cars Melbourne Mark O’Connor hosted our community with a mix of humour and track day experience that further set the scene. Grant Denyer, a long-time Lotus driver in tarmac rally and circuit racing alike, painted more of a picture for the audience, explaining his affinity with the race track that sat just beyond the pit wall from dessert.

Signifying the significance of this event, Lotus Cars Australia welcomed APAC and China Regional Director David McIntyre to The Mountain, and he addressed guests with some tantalising hints about where Lotus is heading. A further indication of LCA’s standing was a specific video message delivered by Phil Popham, Group Lotus CEO, which further energised participants for their favourite brand’s future.

The following morning’s eerie, cool calm was soon shattered by the sound of Lotus cars being warmed through. They were about to experience Bathurst; some for the very first time, others for the umpteenth time, but all smiled slightly nervous, anticipatory, ready-to-explode smiles.

An official driver’s briefing outlined the seriousness of what the group was about to embark upon, while simultaneously providing a comfort level: Race Solutions, who had successfully run the Bathurst 12 Hours safety and rescue program the weekend before, would be on-hand to ensure the community had the best in trackside marshalling and safety, while Mark introduced an elite crew of driver trainers that would sit-in with those seeking instruction. This list included Paul Stokell, reigning Targa Tasmania winner and consecutive Australian Targa Champion aboard a Lotus Exige Sport 350.

A further attractive aspect of these Lotus Only track events is that you set your own pace: there are no pace cars ahead, and the experienced organisers work hard to ensure your vehicle heads onto the circuit in an appropriate position, so you can get on with developing your skills. Should it present, overtaking is done ‘via consent’, using the indicators to let the other party know which direction to head.

Joining the wild array of customer Lotus cars was a fine spread of the latest machinery from Lotus Cars Australia itself. A select range of international and local media was on-hand to join in the day, embedding themselves in the Lotus Cars culture and having the chance to sample the Elise, Exige and Evora ranges on road and track.

The breadth of Lotus cars scattered throughout the pit garages was eclectic: from slick-shod and evil-sounding Exige S1s through to a new Elise Sprint 220. One of the most inspiring sights was of Laura sprinting her Elise Cup 250 Bathurst Edition – one of only six built – on her first time at the mountain. From the extreme lightweight S1 Elises and Exiges through to a gorgeous Evora GT 410 Sport IPS that was driven to and from the circuit, there was a vehicle suited to every experience level.

Like the vehicles, specific on-circuit groups were designed for all comers. Two timed ‘Sprint Groups’ would alternate with an untimed ‘Drive Group’ throughout the day, allowing those track demons to carve off tenths while others could learn lines and admire the circuit’s majesty in the Drive category, without worrying about timing pressure.

Wearing his race engineer, track operations and LCA CEO hats simultaneously, Lee Knappett could be seen charging up and down pit lane, headphones on and radio hooked up: directing traffic, issuing tech instructions, shaking participant hands and answering media questions in stride. He was ably supported in the pit lane and surrounds by COO Richard Gibbs, Mark O’Connor and marketing manager Emma Morley, who doubled as the event’s photographer.

The relative morning cool enabled Sprint Group 1 to quickly work down its lap times, Geoff Noble’s stunningly rapid 2004 Elise winding down to a 2:20.5 lap time. For context, a BMW M4 GT4 race vehicle qualified for the 2020 Bathurst 12 Hour with a 2:16.8.

For the less experienced Sprint Group 2, lap times improved through the day, track experience outweighing the higher ambient temperatures. After lapping strongly in the 2:37 bracket, Dion Morrison finished the last timed session with a 2:34.9 in his Exige Sport 410.

Throughout the day, comments around the sheer steepness of climb and descent on the circuit formed a key theme, drivers climbing out wide-eyed. After a lap around Mount Panorama Circuit in the gorgeous metallic orange Evora GT 410 Sport, APAC Director David McIntyre – no stranger to motorsport – exclaimed: “I think I left my stomach behind on the crest of Mountain Straight!”

A catered lunch and all-day espresso coffee and cold drink service was situated above the high-octane pit garages, ensuring plenty of hydration opportunities… and the chance to talk up your track technique, if you were so inclined.

As the afternoon light again began to soften, the supercharged scream of an Elise Cup 250 mingled with the howl of a titanium exhaust-equipped Exige Cup 430, it was time to take stock of the day.

Each 20 minute track session ran like clockwork, with brief interludes to allow locals farm access allowing a chance to reflect, discuss and improve on the next session’s lines. The slightly nervous morning laughter was replaced with triumphant grins, as the realisation of sharing something so ‘bucket list’ with like-minded people truly set in. The whole experience built still further on the unique community bonds we share within the Lotus family.

See the all the track action, view the event photo album here
Lotus uses cookies to optimise and improve the website, as well as enable the availability of certain functions. More Info